There were so many questions I wanted to ask from Miriam Bibby I din't know where to start. But eventually I got the most important ones written and sent to Miriam. Her answers are below.

When did you write your first story and what was it about?

What kind of writing jobs have you done?

You name it, I've probably done it. I've always written. My first pieces were published in magazines and local papers before I was fourteen. Sometimes letters ("Send us a letter and win a jigsaw puzzle!") and sometimes "editorial" in its broadest sense. Very broad indeed! I've worked as a commercial copywriter and in PR. I've edited and contributed to so many in-house and industry magazines that I've lost count. When I first tried to make a living as a writer, several decades ago, I sat down and wrote articles about things that I found interesting, researched the publishing world and sent them off to publications that I thought might like them.  My hit rate was about 90 per cent, which I now realise is startlingly good for uncommissioned work. Making a living out of it was, however, a different matter.

My work has been published in many journals and magazines including "Living History" (now "BBC History Magazine") and "Focus", the popular science magazine, for which I wrote two pieces on Egypt - one on ancient Egyptian royalty and one on genuine mysteries of ancient Egypt.

As the years have gone by I've come to have greater focus as a journalist and writer compared with my scattershot approach in earlier years. I'm a qualified historian and archaeologist - and as you know, Leena, I was a tutor and course developer for the University of Manchester's networked learning Egyptology course. My real passion is for the history and archaeology that tells the story of the relationship between horses and humans, so that's now what I tend to write about in both my factual pieces and in fiction.

However, I still practise the skills that any commercial writer or journalist needs -  if you want 400 words on "The history and use of garlic", or a vast range of other topics, I produce clean concise copy very quickly. I'd recommend all writers to spend at least some time learning and practising the skills of commercial copywriting.

Tell us about the books you have written – and where can we find them?

The second is Mistress Meg and the Silver Bell, in which there's plenty of trickery going on around an importance match between two horses owned by the Marcaster gentry.

You edited my book despite your busy schedule (thank you!)– when did you start doing editing jobs? Would you be willing to take editing assignments from authors?

My first "proper" editing job was as editor of "Hoofprint" magazine back in the mid 90s. I'd been a freelance for them for over ten years and when the editorship came up I jumped at the chance. It was a regional equestrian magazine as you can probably guess - the name is a bit of a give away, hmmm? - and so it fitted in perfectly with my interest in horses.

I'd been in contact with a lot of editors by this point, but, if you can believe it, had never really thought very much about editing myself. I discovered that being an editor, helping other writers to achieve their full potential, is one of the loveliest jobs on earth although it's a very demanding one. Seriously, it is. It's not something that's to be taken on lightly. When you edit other people's work you really are holding their soul and their dreams in your own hand. You need to be firm; you need to be kind; you need to be generous. You need empathy. And you need to be able to tell them "to get on with it!" in a million different ways.

Any honest editor would say: "I will take on an editing assignment if I genuinely feel I can help the author realise their vision in such a way that readers will see it, feel it and experience it too." That's my take on it, anyway.

Where in the world do you live?

How do you schedule your own writing?

I get up at six every morning and start right away without any distractions and I do not stop until I've produced 10,000 words. *Tears sheet of paper from old-fashioned typewriter and starts again.*

No, of course I don't. I'm like all writers. Given the opportunity, I prevaricate. I make excuses along with the endless cups of tea and I think of all the other things that urgently need my attention. However, at some point in the day, with a laptop balanced on my knee or on the table, in between mucking out horses and taking the dog for a walk and ignoring the dusting, I *will* write something. I *will* write a minimum of 1000 words. I will use it somewhere - perhaps on my Facebook page, or possibly I'll stow it away as a research document.  It will be used at some point.

What are your tips to authors?

This is a trick question! The best advice for writers that I've ever come across is probably the advice that Bernard Cornwell dishes out - and he's a very successful writer. He eschews (useful word, that) the creative writing courses, the sharing of your work with other writers, works in progress and so forth - everything that seems to be the habit these days.  So seeing as Bernard Cornwell has already done it so beautifully in my 2008 edition of the Writers' and Artists' Yearbook, here goes: first of all, when it comes to fiction, I quote: "Story, story, story". Secondly, when it comes to the reason for writing it: "Only three opinions matter. The first is your own. You write for yourself. You write the books you want to read. The second opinion which matters is that of the professional gatekeeper, whether agent or publisher, and their views differ hugely from the folk who teach it. The third vital opinion is the reader, and on that your success depends."

Have things changed now that we can all self-publish? Not that much really. His advice is still good, but the best advice of all that he gives is: "Get on with it! Tell the story!" You must want to know how it all turns out - that's what keeps you writing. If you don't want to know, who else does? That's the best reason to get on with writing. And all the rest of it, dear author, including the snazzy little computer programmes and apps, reading other authors' tips for writing and so on, is nothing but distraction.

I thoroughly enjoy your Mistress Meg stories –
where did her mysterious character come from?

Meg is based in reality - cunning folk really did exist and still do! Their role in society was very important - part detective, part analyst, part confidant, part counsellor and sometimes matchmaker - they helped people with all the problems and issues of the day, many of which are similar to those of our own day and age. There is an element of a real person in Meg, someone I knew who was incredibly wise, but also a very private person, so although I've drawn on their skill and way of life to inspire the character of Meg, they are very different in character. And as for Cornelius Nose-all - possibly my own  black Patterdale dog Findlay may have contributed to the original inspiration, but Cornelius is definitely smaller, more belligerent on occasions and very sure of himself. I see him as being like an Affenpinscher, if you know the breed. They have very distinctive little faces, somewhat cat-like; and they can be very pompous, which is hilarious to everyone else, though I don't think they always see the joke.

Where have you gathered your knowledge of England the Elizabethan age?
Is it your favorite historical era?

What kind of books do you read for relaxation? (Or do you have time to do so?)

I read non-fiction almost exclusively, although I have tentatively introduced a bit of fiction back into my reading. I don't really distinguish between reading for pleasure and reading for research. The best kinds of non-fiction are as gripping and readable as fiction and I just don't have enough time to read both! I always have a massive backlog of books to read. I've just finished reading a biography of Catherine de Medici and I'm about to start on two books on the history of horse racing. I also review horsey-history books on Amazon under the name Horseback Historian.

Are you writing a new novel? What is it about?

Yes! The third in the Mistress Meg and the Elizabethan Rogues series is well on the way, even though finding the time to do it is a real stretch. It's called Mistress Meg and the Alchymist and is set on the Anglo-Scottish border at the end of the 1580s, so I am able to draw together several of my research interests. There are some new rogues as well as some of the old friends, plus plenty of eery border magic, reivers and horses, of course. And a dangerous love affair - I know you like those!

Do you have a blog?

Also, there's Meg's own Facebook page where readers can go and hang out with Meg and Cornelius and read about the history of magic, tarot cards and so on. https://www.facebook.com/MistressMegCunningWoman/ 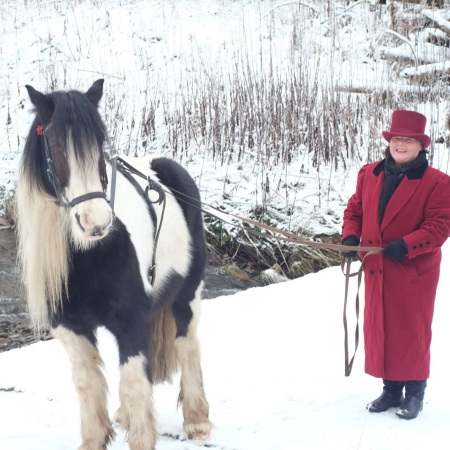 Back to Interviews Main Page from Miriam Bibby